Up the Down Staircase (1967, Robert Mulligan)
Sandy Dennis is amazing as a teacher who tries to get through to her students. I was surprised at the quality of this film, directed by Robert Mulligan, although I probably shouldn't have been. It's just that no one really talks about this film, even though it is an "iconic" teacher movie in the same way that To Sir With Love, Stand and Deliver, or Dangerous Minds are. 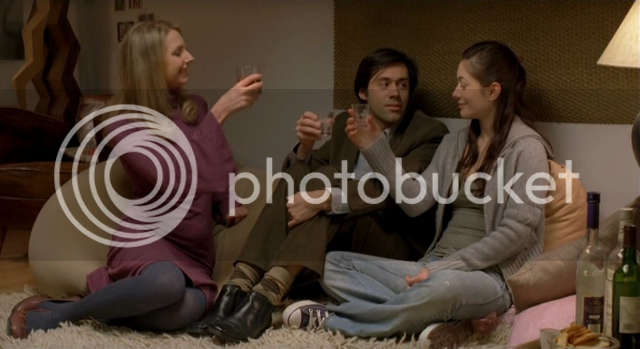 Changement d'adresse/Change of Address (2006)
Emmanuel Mouret is really a top comedy director in France. This film is perhaps not as well-known as Shall We Kiss? (which received distribution in the United States), but is perhaps even more funny and charming. Truly a gem. If you wish that Woody Allen was French and young again, perhaps you'll find what you're seeking in Changement d'adresse.

Les belles de nuit/Beauties of the Night (1952, René Clair)
This film reminded me of three films: It Happened Tomorrow (1948), Bill & Ted's Excellent Adventure (1989), and Midnight in Paris (2011). It Happened Tomorrow was also directed by René Clair and seems to explore themes of time travel. The ensemble of historical characters featured reminded me a lot of Bill & Ted's Excellent Adventure. And last, but not least, Midnight in Paris' characters wished they were a part of another time and place, much like the characters in Les belles de nuit. So, this film had elements from a bunch of different films that I liked. I couldn't dislike it at all.

Ça commence aujourd'hui/It All Starts Today (1999, Bertrand Tavernier)
The plot may seem tired or boring: A schoolteacher doesn't have enough resources for his students. But Bertrand Tavernier is a master, so never underestimate him. This movie was phenomenal. I was surprised to find it on DVD at my local library. Definitely check around for this movie. It exists and it worth tracking it down.

The Bostonians (1984, James Ivory)
TCM cast the spotlight on director James Ivory in September. I had enjoyed the films I had seen from him before (which are typically produced by Ismail Merchant and written by Ruth Prawer Jhabvala). However, I thought I had seen all his best films. I, of course, was wrong. Based on the novel by Henry James, The Bostonians explores a world of liberal New Englanders who vie for truth, friendship, and love. At first, Christopher Reeve seems out of place as a Southern lawyer. Strangely enough, his melds into his character with the disguise of his mustache and Southern accent. You almost forget for a minute that at one time he played Superman. Almost. Finally, there's Vanessa Redgrave, who was nominated for an Oscar for this film. She did not win (she lost to Sally Field who won for Places in the Heart). Her subtlety is amazing. Her character is Olive Chancellor, who is stronger than Verena Tarrant, who the movie almost seems to be more about. Olive is Verena's mentor and takes over her life in a Svengalian fashion. So, above all, I'd recommend this film for the great characters.