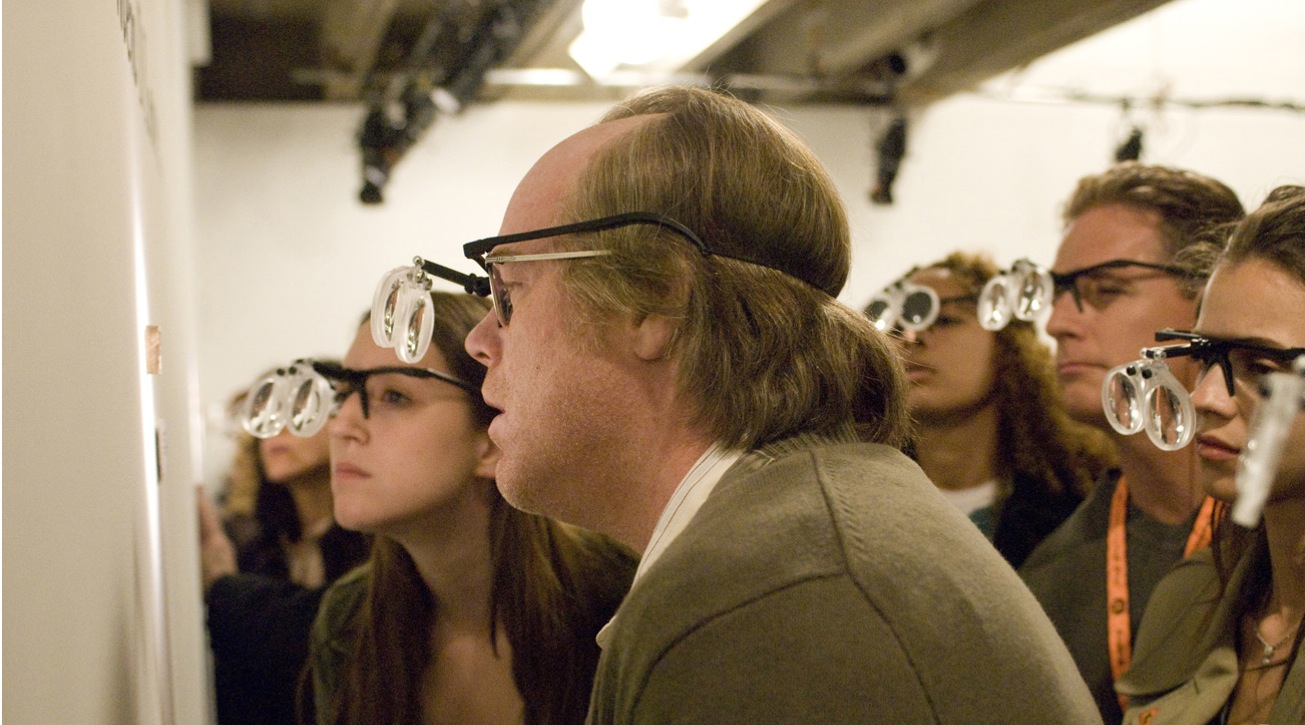 Charlie Kaufman explores the depression of Caden Cotard, a playwright/ hypochondriac (Philip Seymour Hoffman). It all stems from his wife (Catherine Keener), but he knows and the audience knows that she is not the cause of all his problems, although she is quite unsettling.

We are introduced to Hazel (Samantha Morton), a sweet distraction from his decaying family life. However, his sense of loyalty stands in the way of anything meaningful happening with her.

Sammy, the actor who plays Caden in the play, seems to overtake Caden's life and becomes more like Caden than Caden himself could ever be. Lines of fantasy and reality blur as Sammy makes creative choices about the character of Caden that Caden disagrees with. Then, as if that weren't enough, the role mutates to the point where actress Millicent Weems (Dianne Wiest) takes over the role. She becomes Caden's doppelganger, taking control of Caden's life, when he is unable to cope.

The film starts in October, 2005 and continues over forty years into the future. Nothing much changes in the world around the characters. The only thing that is constant is time, spinning out of control. When his grown up daughter, Olive, falsely accuses him of ruining her life, her perception totally skewed, Caden begs to be forgiven in what is a very moving scene.

Not to be overlooked is Hope Davis' psychotherapist character. She plays the straight guy, nodding, asking how Caden feels. Oh it feels bad? Good! Her collection of self-help books (all written by her) don't help Caden solve his problems. They are only false remedies that Caden tries, in effort to satisfy him in his life. Caden either projects his health problems onto her, or she has problems of her own (a grotesque blister on her toe that mirrors the boils on Caden's legs).

Emily Watson plays an actress that is portraying Hazel's character. To me, she and Samantha Morton are like the same person, the same actress. I only saw their similarities. However, apparently, Charlie Kaufman cast them because of their differences. Also, the characters are supposed to be extremely different. But at first, the overwhelming similarities are often confounding. Emily Watson takes over Hazel's character and acts in ways Hazel would never act, just as Sammy and Millicent overstepped their bounds with the Caden character.

What is moving about this movie? Certainly Caden's connection with his daughter, Olive. Certainly his affection for Hazel, the closest thing he has to a soulmate. Yet he always manages to screw things up with her, no matter what. Also, death is explored in this movie, the idea that we're all going to die one day. That everyone is the main character of their own story. That we all have choices.

Synecdoche, New York is a gross and weird movie too, different from anything that you'll see this year. That's ultimately why I love it. It attempts to show the truth through all the seemingly unimportant details, yet they are tied together in a nice bow without the movie seeming too perfect. It's offensive to many, the way life is shown, yet I laughed at the things I should have been shocked by.

After this film, it almost doesn't make any sense to see any movie by anyone except for Charlie Kaufman. No one has more sense of oneself (and everyone else) and yet no one is more lost and wandering (and boy, I thought I was bad!). Kudos to Kaufman for succeeding yet again, when he could have taken the easy way out and written something more simplistic or less gut-wrenching.

So, uh, yeah, I really need to see this soon. Add me to yo' blogroll: gotpoetryinme.blogspot.com

I'll do the same once I figure out how...

Hi Allison. I like that your blog is pink. I am stopping by to encourage your blogging: AWESOME.

hello!!! I see we both have posts on Synecdoche, NY. Let them duel!

Thank you Ian and Eli. Btw Eli Nick Plowman from way back had a Synecdoche NY blog too. I think that it'd be great if we could link all the reviews for a specific movie together on like the main TLC blog. Would be pretty fun to contrast & compare perhaps.

I too saw and reviewed this film, as you noted, and absolutely loved it. So glad that you did too, and your review more than does it justice.