Founded by Henri Langlois
Co-founded by Georges Franju and Paul-Auguste Harlé (the Cinémathèque’s first president)
This isn’t the original Palais Royal location. The Cinémathèque is now located in the Bercy area in the 12th arrondissement.

Note: this is a long-winded review of my January 17th visit (2010).
Also, no photography was allowed.The pics included below may not be of the actual artifacts.

Musée du Cinéma
Walking in, you could see a replica of (long story short) a Zoetrope. 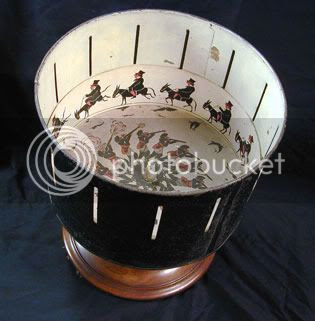 It was lifesize. You know in those museums you went to as a kid, and they used to have those “wishing wells” where you throw in a coin to see it spin and it would be donated to charity? Well, it was as big as that, and the pictures were of birds. It was kind of neat and I spun it for awhile on my way in and/or on my way out.

It turns out that there is this guy named Will Day. He was probably the first “collector” of movie-related items. I thought, what if there were others. But actually his collection was on such a large scale that it ended up blowing my mind. After his death, a lot of the items were donated to the Musée du Cinéma including posters, artifacts, costumes, stills, and even outdated projectors which would be beneficial to film historians.

In early January, I viewed a film that was a stunning revelation: Eadweard Muybridge, Zoopraxographer (1975) (on Jonathan Rosenbaum’s 1000 Essentials list). Only to reinforce my excitement for this forefather of cinematic development was a display of some of Muybridge’s photos. 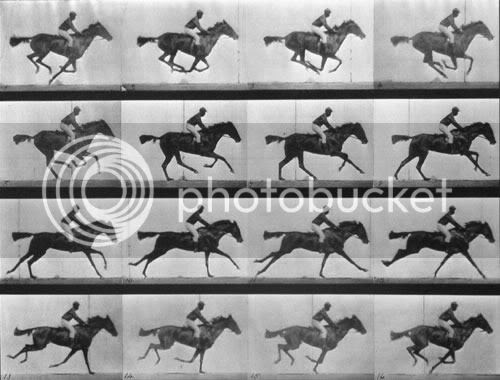 In addition, there was also a zoopraxiscope on display. Eadweard Muybridge would project his images on a glass plate. Obviously, glass is inflexible and the Lumiere Bros. ended up creating a much more practical projector. 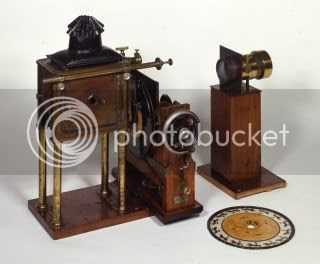 Muybridge also influenced Etienne-Jules Marey a renowned physiologist. Muybridge originally started taking photos to study the movement of the human body (and horses and other animals too).

Other outdated projectors:
(Hand-cranked) Mutoscope (Got to fool around with it. A hand tinted film like and from the same time period of Le farfalle (1908) was available to view on it. It was also brown and wooden like the picture below.) 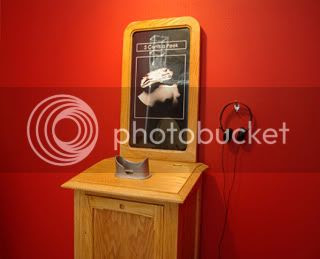 Actually I think there were two of them. My notes read that there may have even been a third and red mutoscope in a different part of the museum.

There was also a “projecteur + en rouleuse pour film” (a 35mm projector from the Lumiere Bros.)

Apparently, William Friese-Greene directed films before 1889 (although IMDB lists him with one sole credit from 1889. I trust the Cinémathèque). WIKI (link above) lists him as the creator of “cinematography”. On display was a biophantic lantern aka phantoscope. 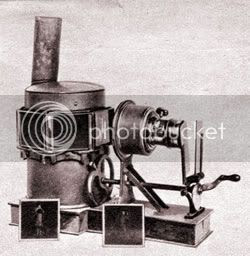 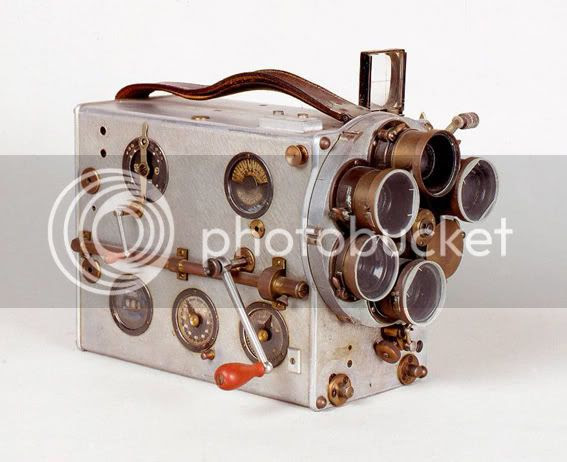 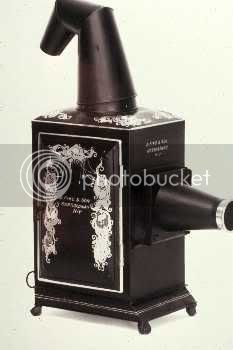 -Camera Parvo from Andre Debrie from Paris 1928 (Murnau filmed Nosferatu with one of these)
-Megaletoscopio aka Megalethoscope Designed by Carlo Ponti of Venice circa 1870. There was no indication that this wasn’t Sofia Loren’s Carlo Ponti, so I have just found out now that this Carlo Ponti was an entirely different man altogether.
-Lantern magique polychrome (Polychrome projector) aka Lantern Carrée by Auguste Lapierre 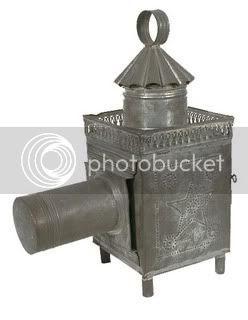 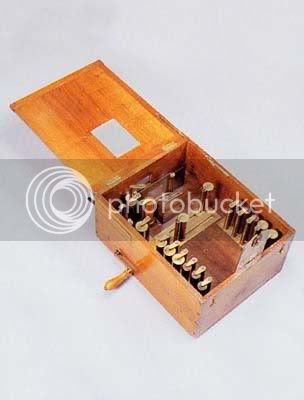 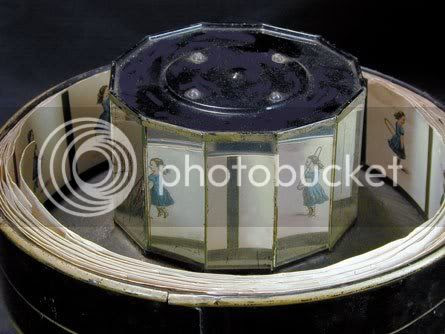 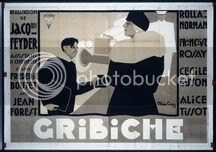 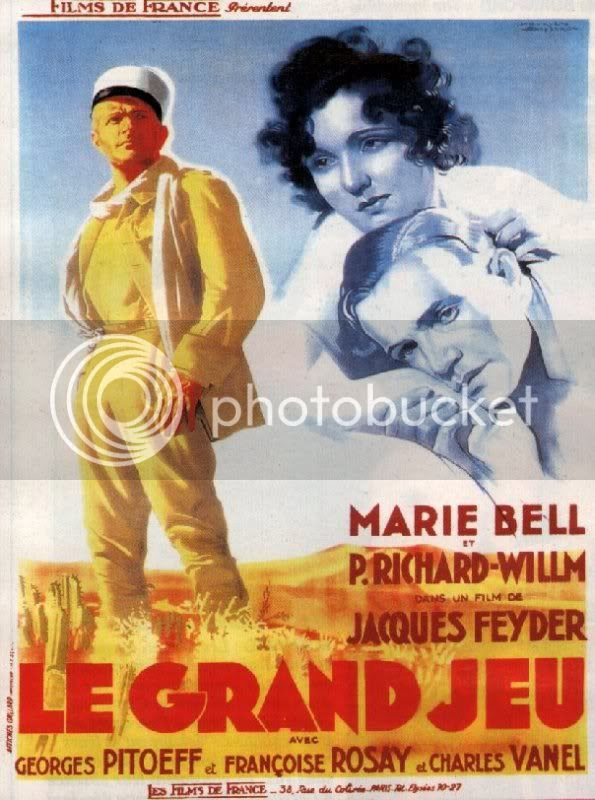 -Holiday Rambles in the Isle of Man (A.H. Vidler) Neither the film nor auteur is on IMDB. That is too bad. The poster reads “The most exciting set of FIRE SCENES [sic] ever photographed.”
-Life of a Collier (Vidler) Seems to be quite a shame that none of these titles are turning up on IMDB or Google. The poster reads: “Six in bed! A comic of the light kind.”
-Marcel L’Herbier’s L’épervier (1933), Feu Mathias Pascal (1926) (also maquette d’affiche/set design drawings by Erik Aaes), L’inhumaine (1924)
-Les aventures de Robert Macaire (1925)
-Les Vampires (Feuillade) One of the coolest and most mysterious posters. It read simply “Qui Quoi Quand Ou…(Who What When Where…)”
-Espoir Sierra de Teruel (Andre Malraux)
-La proie du vent (René Clair, 1927)
-Abel Gance’s La Roue (hand-drawn poster) signed by Yves Alix and Le nègre blanc (1912)

There were beautiful costumes on display from the following films:
-Peau d’ane donkey costume
-Stavisky… (1974) Dress worn by Anny Duperin
-Belle of the Nineties (Leo McCarey) Mae West’s hat (it has a snake on top).
-Titanic Barbara Stanwyck’s black lace over gray dress (her name was misspelled as Stanwick, who knows someone over at the Cinémathèque that can fix the description card for us?)
-L’argent (Marcel L’Herbier, 1928) White dress with soie portée (silk)
-Le Vertige (Marcel L’Herbier, 1927 (IMDB) 1926 (Cinémathèque)) black dress with a gold hem at the bottom with flowers (very beautiful)
-*L’assassinat du duc de Guise *aka *The Assassination of the Duke de Guise *(1908) Albert Lambert’s velours et soie costume (velvet and silk)

In addition there were bracelets (boucles d’escarpins) worn by Louise Brooks, assorted jewelry (bijoux portes) from Theda Bara, and a white sequined dress from the premiere diva Francesca Bertin (IMDB says "Bertini"). I had never heard of Bertin(i), however, if you had seen this dress, you’d believe she was the grandest actress in the whole entire world at one point.

They also had some of Oskar Fischinger’s hand-drawn disks from 1930: 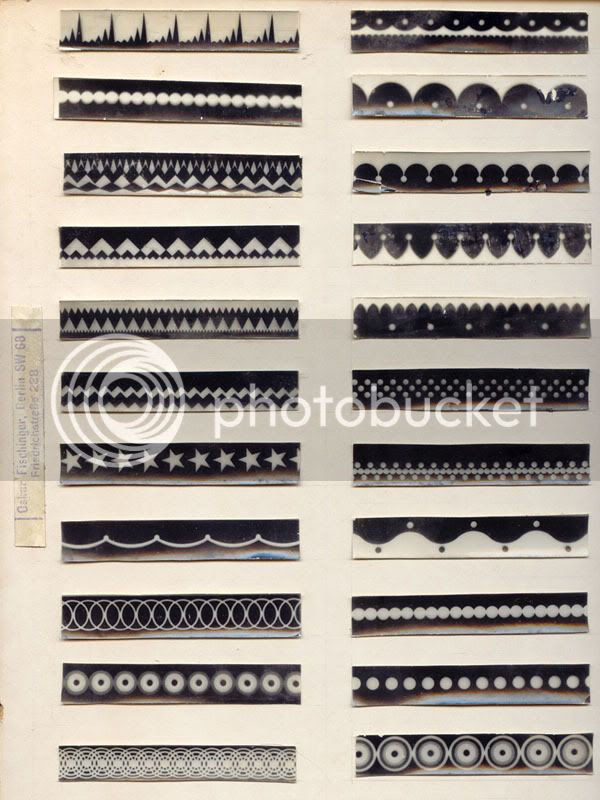 While I was aware of this man’s beautiful work, I had not yet seen any of his films. I have since remedied that.

Nearby were Marchel Duchamp’s “ready mades” (roto reliefs). He began creating these on bicycle wheels.

Upstairs:
-Video of Alfred Hitchcock praising Henri Langlois: “He has done so much for film.”
-Video of Henri Langlois receiving honorary Oscar in 1974
-Telegrams protesting the dismissal of Langlois: Cukor, Kubrick, Bunuel, Dreyer, Minnelli, Lang, and a collective of Japanese actors/directors including Kurosawa, Oshima Nagisa, Mifune and Naruse (all of the prominent directors’ names were underlined except Naruse, it was strange)

Additional notes:
-Henri Langlois preferred _"300 ans de cinema":http://www.effets-speciaux.info/article?id=318 _by Athanase Kircher (b. 1601) to the Lumiere Brothers. I’m still trying to figure out what this is and who Athanase Kircher is, so please have patience.
-Dieu a choisi Paris (1969) poster I think
-Picasso cineaste in 1914 (probably a photograph)
-Poster for *Parade, ballet *(Jean Cocteau, 1917) Theatrical production according to wiki: music by Erik Satie, choreography by Léonide Massine
-In silent films, red coloring was used to signify fire and blue meant night. 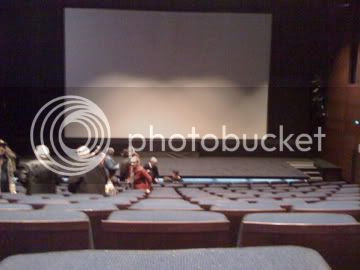 In addition to going to the museum, I went to the showing of the Gordon Douglas film So This is Love . The spirit of film preservationist Henri Langlois lived on. You had to go up to the mezzanine level to go to the main theater named after him; it was cool. 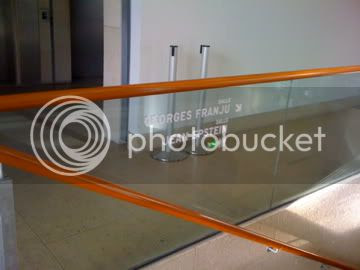 There are theaters named after Georges Franju and Jean Epstein as well.

Seven Great Films I Saw in the Month of January, 2010 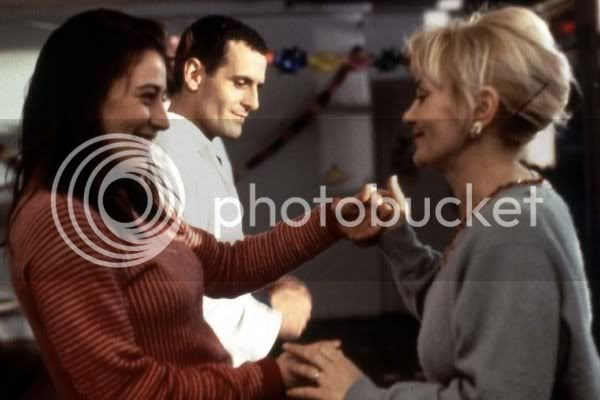 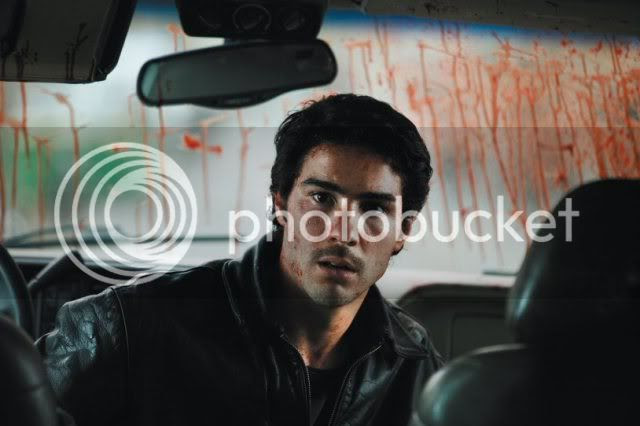 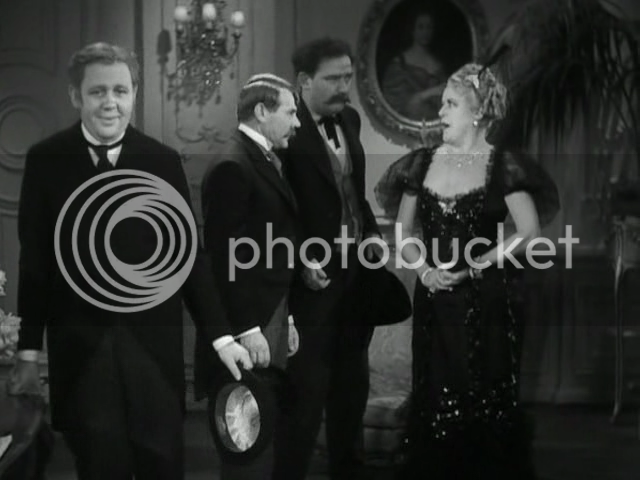 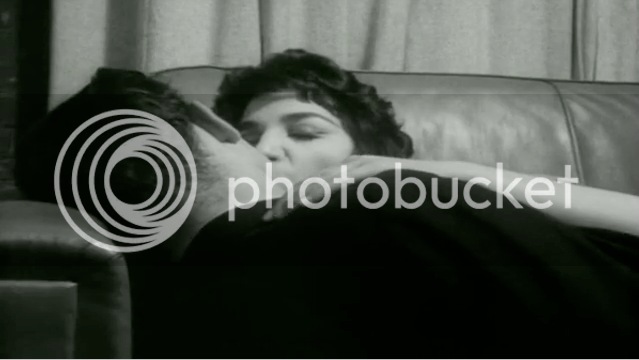 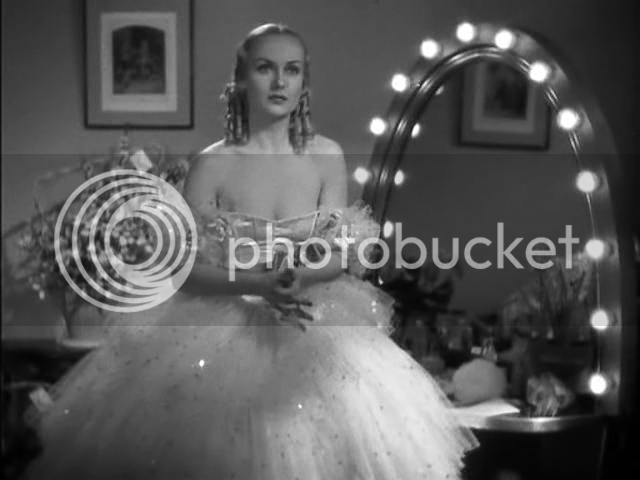 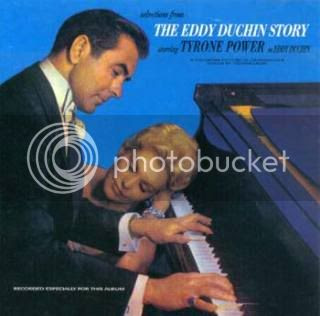 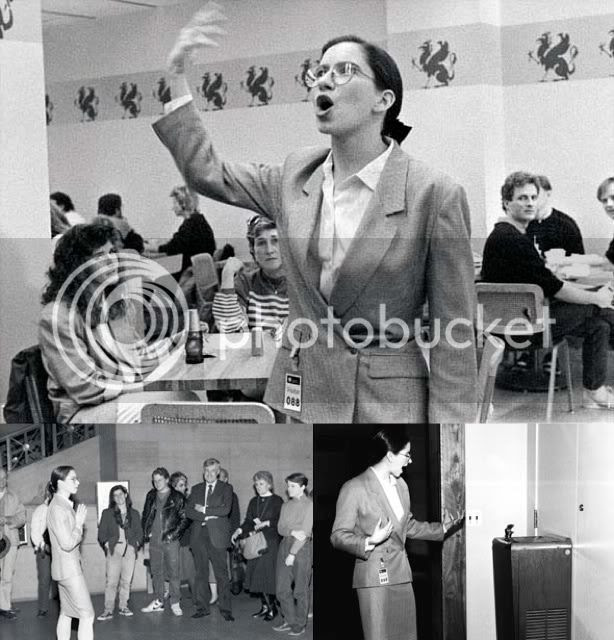 Museum Highlights: A Gallery Talk (1989)
in color, no additional stills available on the web
Posted by Allison M. at 8:55 AM 2 comments: