If you're a filmmaker thinking about submitting your short film to film festivals, check out SoCal CIFF. In its third year, they were sold out opening night: August 12, 2016. It was held at the wonderful, historic Raleigh Studios where attendees of the festival gained exclusive entrance on the lot. In addition to complimentary drinks and food for their V.I.P.s, they also had a great exhibit featuring Sara Radovanovitch's eclectic art, and an amazing DJ: Shai'La Yvonne.
Filmmakers arrived from all over the United States and even other countries to promote their current projects, network, grant red carpet interviews, and participate in Q&As after their screenings.
Featuring over 60 shorts with such a level of quality, several managed to stand out including Audience Choice Winner "Q & A" (Adam Epstein), "#Amish" (Kacey Spivey), "Successful People" (Janina Maria), and "The Traveler" (Jonathan Lawrence, Anthony Bradford).
Some filmmakers were already looking ahead to film their next project. Writer/director/actor Oliver Singer mentioned that the script for the feature-length version of "A.W.O.L." was already written. Producer Annie Clark ("Cry Hard") spoke of wanting to make another short before attempting her first feature. Writer/director/actor/producer Tara-Nicole Azarian is at work on a feature-length cosplay documentary.
The festival closed with an exciting awards ceremony. Multiple award-winners at the festival were "S.A.M." (Best Science Fiction and Sean Kaufmann for Best Actor) and "Legend of Dark Rider" (Best Horror and Titus Paar for Best Director). The post-festival party was held at the Moment Hotel on Sunset Boulevard where filmmakers celebrated their awards and got in the final chance to network before the big weekend finished.
Posted by Allison M. at 4:10 PM No comments: 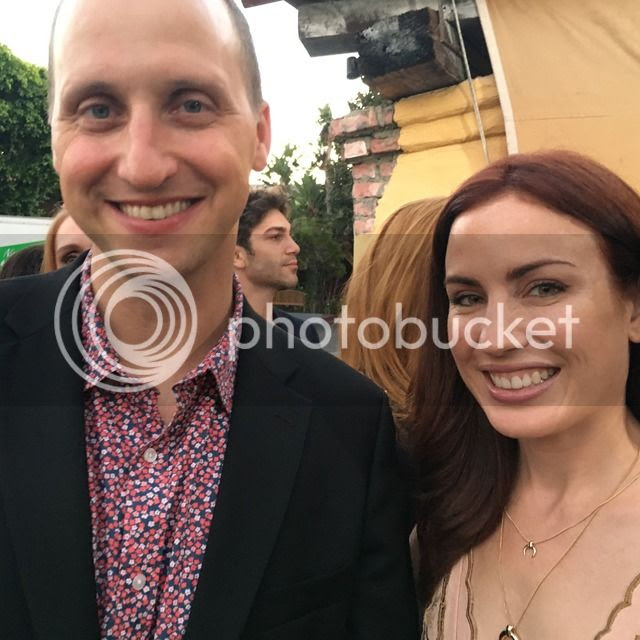 The SoCal Clips Indie Film Festival had a sold-out opening night on August 12, 2016. My personal favorite short was "Q & A", directed by Adam Epstein. Writer Jacob Stark explained to me that this satire was inspired by a real question and answer session that occurred relatively close to the Los Angeles area. Other highlights included the first episode from the web-series "Successful People" and the dramatic "Tu & Eu".

Saturday's schedule will feature first-time producer Annie Clark's "Cryhard". She said it was her first movie ever and wants to make another short before making a feature in 2017. The budget was just 2,000 Canadian dollars, so it met the festival's limit of a $10,000 or less budget.

Also to look forward to is Paul Jury's "48 States of Granddad". He drove through the 48 continental states after college and wrote a book about it before adapting the story into a web-series. While he has also visited Hawaii, he is waiting for the Netflix deal to explore Alaska.
Posted by Allison M. at 10:58 AM No comments: