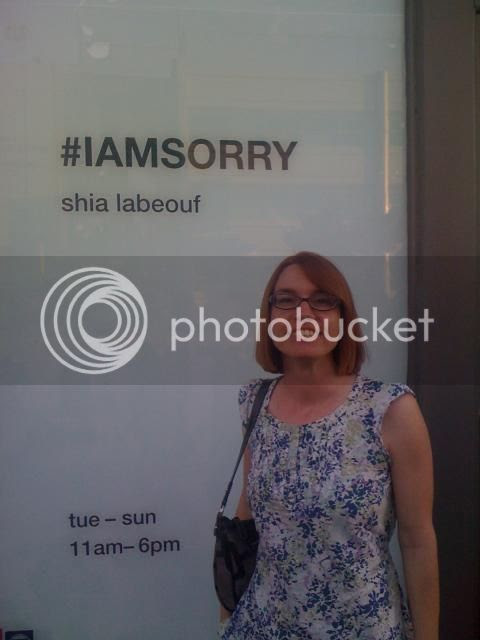 A friend in Pennsylvania alerted me to Shia LaBeouf's performance art piece with this article. Sunday at the Berlin Film Festival, LaBeouf walked out of the Nymphomanic premiere; "I AM NOT FAMOUS ANYMORE" was written on the paper bag that he wore over his head. Yesterday, Tuesday, February 11, 2014, Shia started his apologetic campaign at a space located at 7354 Beverly Boulevard in Los Angeles. What was he sorry for? For plagiarizing the work of Daniel Clowes. Everyone was led to believe this was not a publicity stunt. Yet, it certainly garnered attention.

Reports showed that hardly anyone showed up on Tuesday and that the line ranged from three to six people at any given time. However, on Wednesday, some who showed up when the gallery opened at 11 a.m. did not make it in by the 6 p.m. closing time. Kayce Miller was a sweet girl in a wheelchair who showed up at noon. However, she ultimately was not let in. 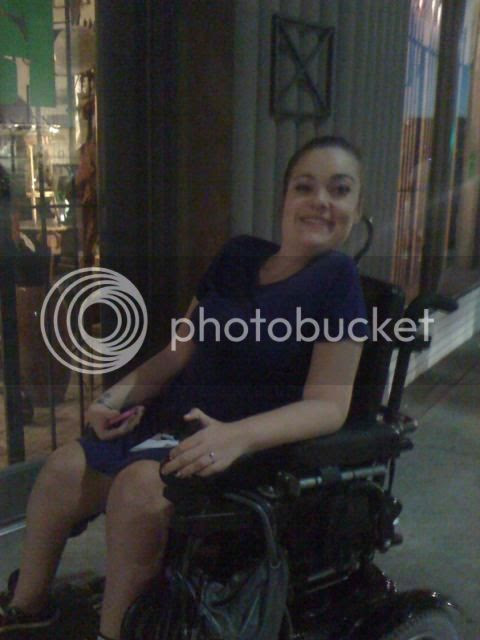 The last person to enter was a woman with bleached blonde hair. She refused to answer me when I asked what time she arrived that day. Later, there were rumors that she had offered to pay twenty dollars to someone in line. When that failed to work, it was alleged that she had cut in line. This was no surprise as many new faces turned up in the beginning of the line at various points throughout the day. While guards did not catch many of the cheaters, one man in a white baseball cap was banned from entering when he tried to sell his space in line.


When it was their turn, each person in line had the opportunity to see Shia LaBeouf alone. There was no time limit. Some people would be able to spend over twenty minutes with him, while others ran out of there within 30 seconds. Some spoke of the awkwardness, because Shia would not speak. He would only sit there and cry with a paper bag over his head. One man played him a song on the ukelele and reported that Shia smiled. How was it known whether or not he smiled when there was a paper bag over his face? That is to remain a mystery.

For most people who ventured out to see Mr. LaBeouf on Wednesday, standing in line became an existential issue. Why were some of us there in the first place? Why were we willing to stand there for several hours to spend only minutes with a celebrity none of us knew firsthand? Several new bonds were forged and information, hugs, and photos were exchanged. Even actress Nia Vardalos was caught passing by the crowd in the mid-afternoon.


By 3:30 p.m., it was pretty clear that not everyone was going to see Shia LaBeouf. A security guard issued a cut off and additional people stayed in hopes that the rate of attrition would give them a chance. However, only about three people were able to move through every ten minutes and it turned out that way before the cut off was actually well beyond the point of no return.

The guards recommended coming early at 10 a.m. or 10:30 a.m. the next day. However, with all the publicity and skyrocketing numbers, you probably wouldn't stand much of a chance unless you showed up at 9 a.m. With the upcoming weekend, it's clear that even more people will arrive. What time will people start lining up? 8 a.m.? 7 a.m.? Unless Shia's team starts imposing a limit of two or three minutes per person, there is no way that all those who have come to see him actually will.

The last day to see him at his space will be Sunday, February 16th.
Posted by Allison M. at 9:48 PM No comments:

Walking and Talking (1996, Nicole Holofcener)
Great debut from Holofcener, focusing on the relationship between best friends.  I discovered it after hearing from several people that it was among her best films. Her most recent film, Enough Said, is also a great dramedy.

The Baby Maker (1970, James Bridges)
Checked it out after a friend raved about it. Basically, it features Barbara Hershey in her best role as a surrogate mother for a rich couple.  Similar to Juno in many ways, but it takes quirky to another level and better explores the emotions of a mother-to-be giving up her child.

Louis Lumière (1968, Eric Rohmer)
Jean Renoir, Henri Langlois and Eric Rohmer discuss the films of the Lumière Brothers, pioneers of cinema.  There are lots of film clips from their early films, many of which are extremely hard to find otherwise.

Do Me a Favor aka Trading Favors (1997, Sondra Locke)
Sondra Locke always brings an energy to her films, whether she is acting or directing.  This film is no exception.   Rosanna Arquette is amazing in this.

Dallas Buyers Club (2013, Jean-Marc Vallée)
Matthew McConaughey won Best Actor at the Golden Globes for a reason. The strength of the movie definitely lies in the performances.