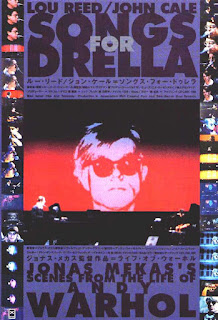 I had a great experience watching Songs for Drella when it had a limited 3-day-run at Film Forum in NYC with director/cinematographer Ed Lachman in attendance.

I'm a huge Andy Warhol fan, so hearing songs about him as "Drella" was totally my thing. The name is a mashup of Dracula and Cinderella and was coined by Warhol superstar Ondine. This was filmed three years after Warhol's death.

Lachman told the story of how he thought the footage from this film was lost, but he found it in his apartment during the pandemic. Also, years before, Lachman's first encounter with Lou Reed was insane as Reed kicked down Lachman's tripod while telling him to "Do it like Andy" (handheld).

The rehearsals of Songs for Drella were shot. Lou Reed didn't want any cameras between him and the audience. Lachman notes that WE are the audience.

It gets a little meta. In "Style It Takes", Cale and Reed reference The Velvet Underground and another song says "John Cale" is "looking really great".

"I Believe" is a chilling song about Valerie Solanas, the woman who shot Andy Warhol. Lou Reed sings that he "would've pulled the switch on her" himself, although she had already died in 1988.

Vegan alert:
Andy called Lou a "rat" as referenced in the song: "Work"